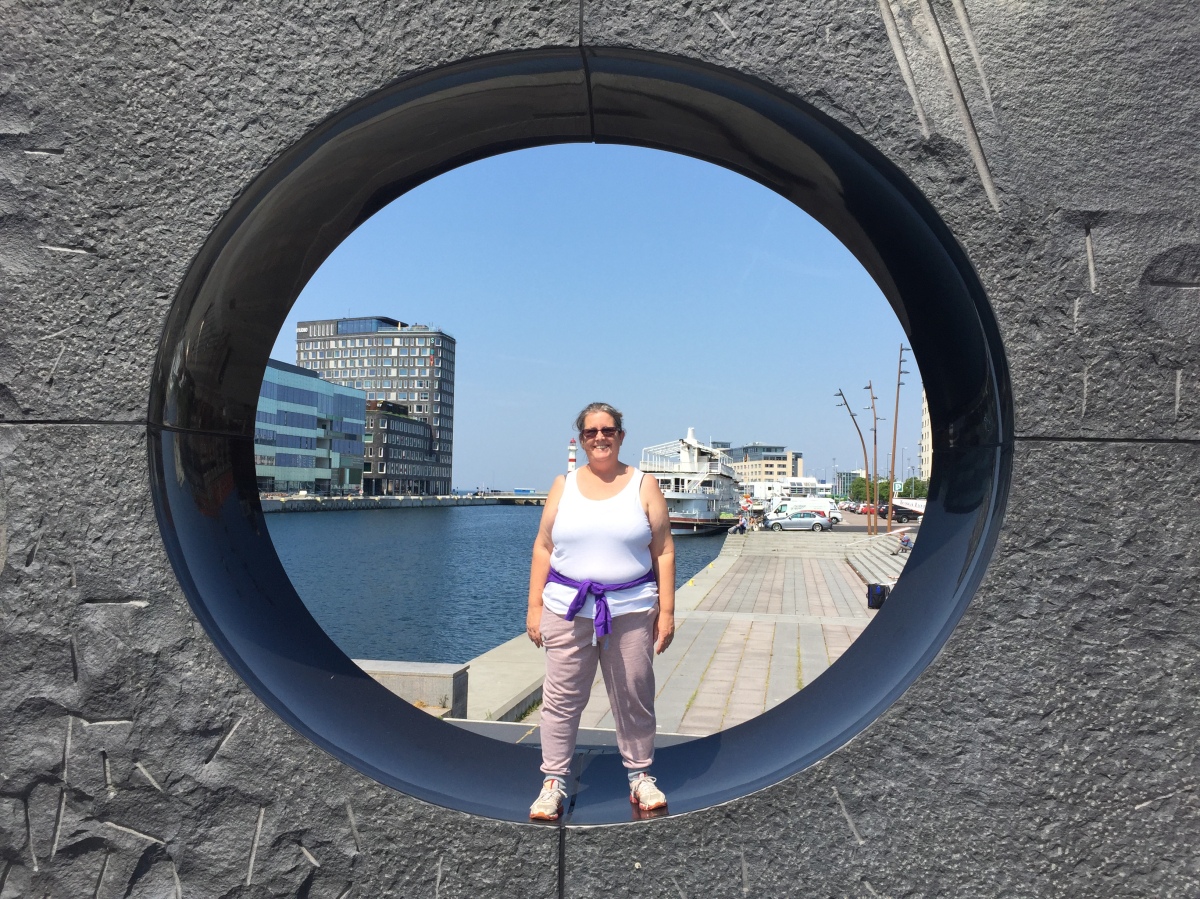 We’re off to Scandinavia for a long weekend of parkruns. We booked it before I fell over in Poland and smashed my knee. It seemed like a much better idea when I had two working legs. But I reckon it’ll just about be manageable with the correct amount of painkillers and alcohol.

I’ve not been to Stansted before. They’ve invested in new scanning equipment (presumably something to do with Donald Trump’s imminent arrival) and they’re determined to get their money’s worth. With my dodgy knee I can’t spread my legs wide enough to stand on the designated foot markings for the body scan, which means I need an old fashioned pat down (she touches my knee which makes me squeal).

We walk towards the gates past the rows of shops. I’m surprised there are so many designer labels represented. You’d think focusing on cheap flights, the airport should be lined with branches of Primark and Poundland.

We fly to Copenhagen, then catch a train across the Oresund Bridge; a five mile long bridge which crosses from Denmark to Sweden, via an artificial island. It sounds spectacular, but it’s a double decker bridge with the railway running beneath the motorway, so in reality there isn’t much to see, just little glimpses of Malmo through the gaps in the ironwork.

We arrive at Malmo station and walk along the river, past numerous bridges and sculptures, to our hotel. It’s called the Garden hotel. It’s built over a multi-storey car park with our sixth floor room opening onto a roof garden, which is very pleasant, particularly as the temperature has reached 31 degrees. It’s the first hotel I’ve stayed which has in-room gym equipment.

In the afternoon, we go for a wander (my knee isn’t capable of travelling too far). Tomorrow is Swedish National Day, so there’s a bank holiday atmosphere. There are lorries full of revellers/protesters circling the Gustav Adolfs Torg, and in the middle, a drunk is having a fight with a statue in an ornamental lake.

We stop to get something to eat and drink. The bars and restaurants are heaving, despite beer being £8 a pint. It’s a good job we’re only staying one night.

Not a good night’s sleep. The hotel has my pet hate; the flimsy bed/mattress topper combo. Every time the old man turns over, it’s like riding a small tsunami. And there’s no a/c so we have our own personal Swedish sauna.

As is Swedish National day, there is an extra parkrun on a Thursday; hence we can fit two runs in two countries into a long weekend. The start is two miles away in Ribersborg; a beachfront park on the Strait overlooking Denmark. I have to work out how to get there when walking is such a pain (literally). Google Maps suggests an electric scooter. I consider it, but can’t work out whether to lead with my good or bad leg. So opt for a good old fashioned bus.

I leave in plenty of time in case anything goes wrong, which it does. My bank card is declined on the bus and the driver won’t take cash. At least he’s started driving before the transaction fails, so I get kicked off one stop later, next to St Peter’s Church. I contemplate buying a travel card and waiting for the next bus, then give up and walk (hobble), arriving at the park with minutes to spare.

Today, I have volunteered as ‘tail walker’ which appears to translate into Swedish as ‘babysitter’. Before I realise what’s happening, a Swedish man has dumped two sullen kids in flip flops with me and disappeared. I set off together with the other tail walker (a very nice lady from Aberdeen) and we cajole the sullen children into walking when they don’t want to. A long and tedious hour later, we dump the kids with their dad (after I have given him my full and frank opinion of being lumbered with them).

I find the old man, who has been waiting for some time and is not happy as my delayed return means we will no longer get back to the hotel in time for the inclusive breakfast. We walk back to the hotel, via the Castle. In all, my knee has managed 7 miles, which is good (I think).

We check out and walk to the station to catch a train back to Denmark . Next parkrun is in Copenhagen in 44 hours.