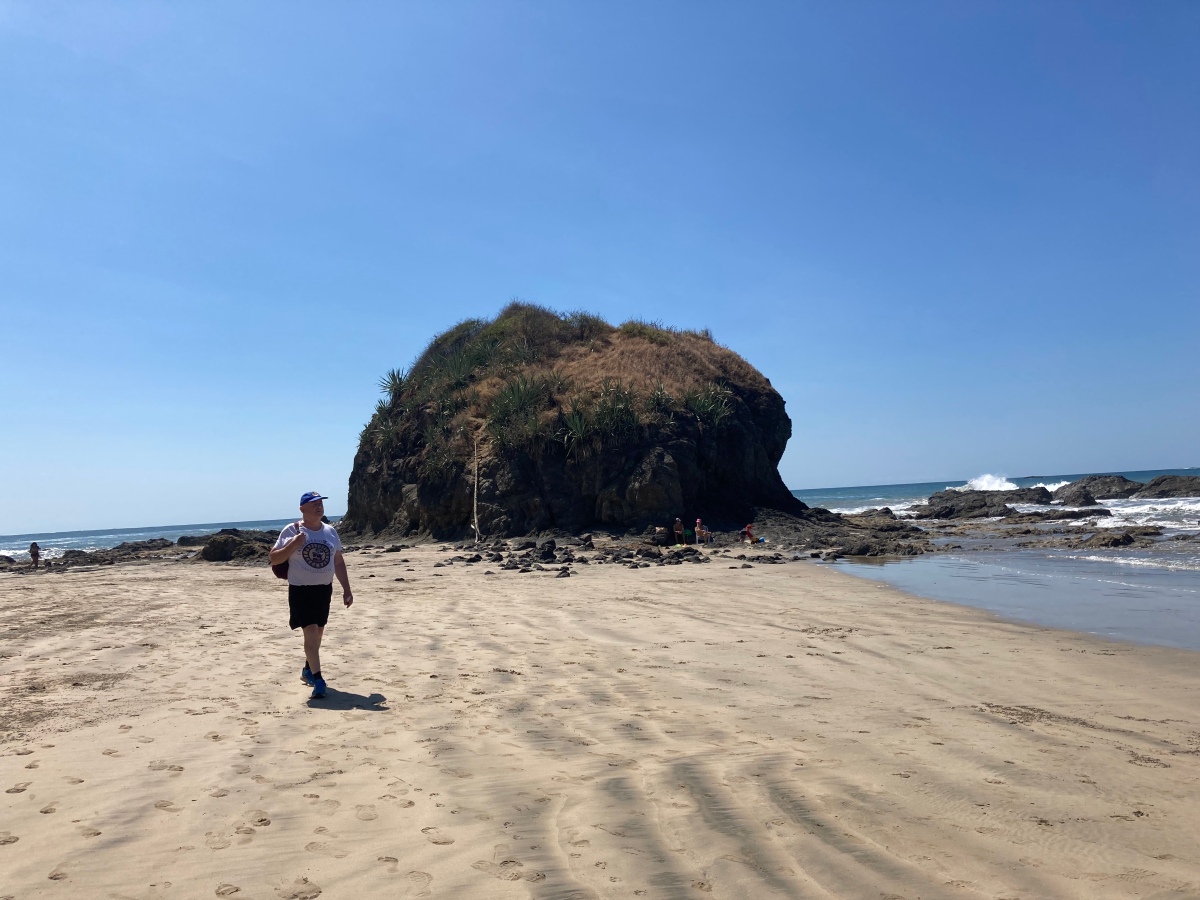 After waiting for an hour for a sandwich at the hotel restaurant yesterday, we opt to have breakfast elsewhere. The old man has chosen Coco Viquez which does a buffet style breakfast. He’s very disappointed when he discovers it’s not self service. And there’s no return visits. I’m happy with my plate of pancakes, pineapple and plantain.

When I planned our trip I had hoped to stay somewhat further south, close to Las Baulas National Park, where you can take a guided tour to watch leatherback turtles come ashore to lay their eggs. However, the park is 42 miles away from our hotel and the tours don’t start until after dark. We don’t fancy driving such a long distance back in the dark, late at night. We decide to visit the National Park anyway, as the guide book says you can take boat trips into the mangroves to see crocodiles and monkeys during the day.

We get ready and walk to the car. The old man can’t find the car keys. We empty our bags (several times) and retrace our steps (several times). Eventually, a very stressful 50 minutes later, I find them on the bedroom floor, wrapped around the foot of the bed.

We set off for Las Baulas. There appears to be two possible routes; one is 30 miles long and the other is 42 miles. Both take around 70 minutes to drive. Google initially suggests the longer route, then at the last minute, changes its mind. Google also seems to think the park is closed on Sundays, despite the park’s own website claiming it is open daily. We opt for the shorter route. With 20 miles to go, we run out of tarmac, as we turn off a numbered road onto a road named ‘monkey trail’. It’s basically a series of potholes held together with dust. We can’t face the prospect of 20 miles of this, so turn round, drive half way back to Playa Hermosa and follow the longer, paved route instead.

We finally reach the park after a 2 hour drive in 32 degree heat. It is, of course, closed. A man appears from nowhere and offers us a go in his canoe for $80. The old man is tempted, but I am over the heat and the stress of the day. In addition, there is no evidence that the man actually owns a canoe! So we take a walk along the beach, pay another man an inordinate amount of money for parking on a bit of scrub for 40 minutes and drive back to our hotel.

We stop at a supermarket to buy some lunch. There is a selection of unlabelled baked goods. I choose a couple at random. We end up with chicken empanadas and something that looks like a sausage roll but is actually full of lemon curd.

After lunch, we decide to go for a swim in the ocean. The water is a sort of greenish-black colour and has a frothy layer of scum on it. It doesn’t smell like the sea water in Bournemouth; there’s a distinct whiff of sewage about it. I decide to brave it (with my mouth firmly shut). I determine to swim for 10 minutes. After 9.38 minutes, an enormous wave appears from nowhere and almost takes me out. For a moment, I am totally submerged and don’t know which way is up. I finally surface somewhat shaken and bedraggled. My mouth and swimwear are full of sand and my hair band has been ripped out of my hair. I stagger back to the beach and once I’ve had a beer to calm my nerves, take a shower to remove copious amounts of sand from my cleavage and various orifices.

Once I have regrouped, we take a wander back along the beach to watch the sunset, then have dinner at a beachside bar frequented primarily by very drunk Americans trying desperately to get laid. And thus ends our last day in Playa Hermosa. Tomorrow we travel inland to the cloud forest of Monteverde.