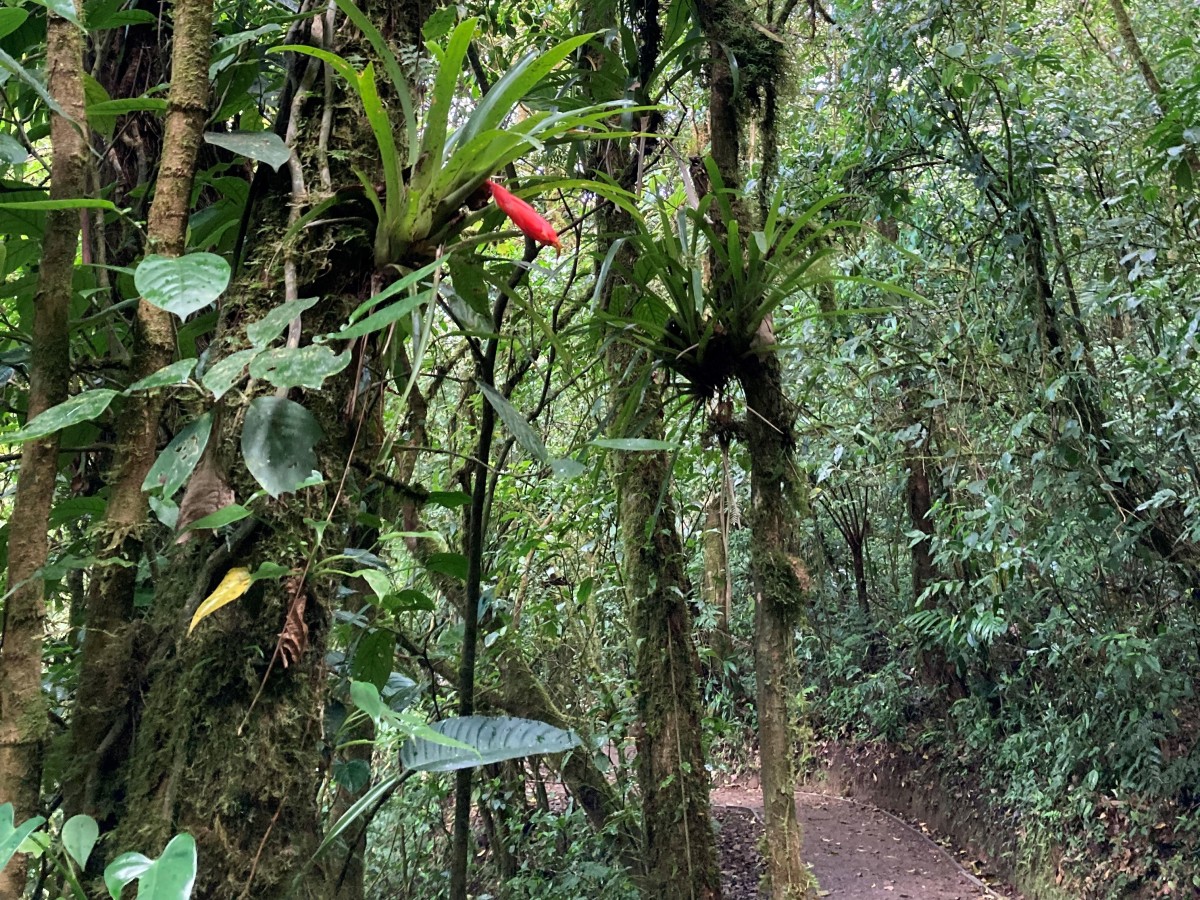 Not the best night’s sleep as the bed is small and uncomfortable. We get up and have breakfast – which reviews describe as ‘simple but tasty’. They’re half right! It comes with ‘juice’ of some undeterminable fruit (it tastes like flat Vimto). We ask the proprietor what flavour it is. He doesn’t know either, goes and checks the packet and returns to tell us it’s ‘grape’. The old man asks for different juice and a new packet is duly opened – this time it’s ‘pineapple’ and drinking it makes my eyes water. Breakfast is scrambled eggs on toast – no plantain.

After breakfast, we head to Monteverde Cloud Forest Reserve. It’s only two miles away, but a few hundred metres higher in elevation, which brings us up into the clouds.

We have to park a kilometre away in a hotel car park and pay $5, which includes a shuttle bus to the entrance. Then another $25 each to enter the reserve. There are a number of trails, several of which are inaccessible as the hanging bridge has collapsed!

We select the Sendero Nuboso which leads onto the Sendero la Ventana. Here, we are promised a viewpoint across the Continental Divide (water on one side of the line flows into the Pacific Ocean and on the other side, into the Atlantic/Caribbean).

It takes an hour’s walk to reach the viewpoint. When we arrive, all we can actually see is cloud. We return to the entrance via the Sendero Camino. It’s cold and wet and I’m over cloud forest by now, so I sit on a bench eating Oreos while the old man follows another trail to a waterfall; Quebrada Cuecha.

We catch the shuttle bus back to the car and drive back into town. I decide I want to stop to photograph a telegraph pole. The old man parks closer to the edge of the road than I realise. I try to climb out of the car onto the road, but there isn’t any road, so I end up on my arse in the ditch.

Once I have extricated myself and got rid of most of the mud, we stop at Monteverde Cheese Factory. This used to be a locally owned factory which provided tours of the cheese making process. Now it is owned by a multinational company and just the shop remains accessible to the public. The old man has ice cream and I buy some locally produced cheese (Monte Rico) for lunch. After another stop for bread, we return to our hotel for a picnic on the bench outside our room while watching a rainbow emerging from the clouds. We are the only guests at the hotel, so at least it’s quiet – apart from the howling of the wind.

We are staying on the outskirts of town at the top of a hill, so access to restaurants is limited if, like me, you are lazy and don’t like walking up and down hills. In the evening, we head to a local restaurant, check out the menu, decide we’ve had sufficient fried food for one week and return to the supermarket for a bag of salad and some strawberries instead. Then it’s another early night, as it’s dark by 6 and there’s not much to do in Monteverde after dark except eat and/or drink.