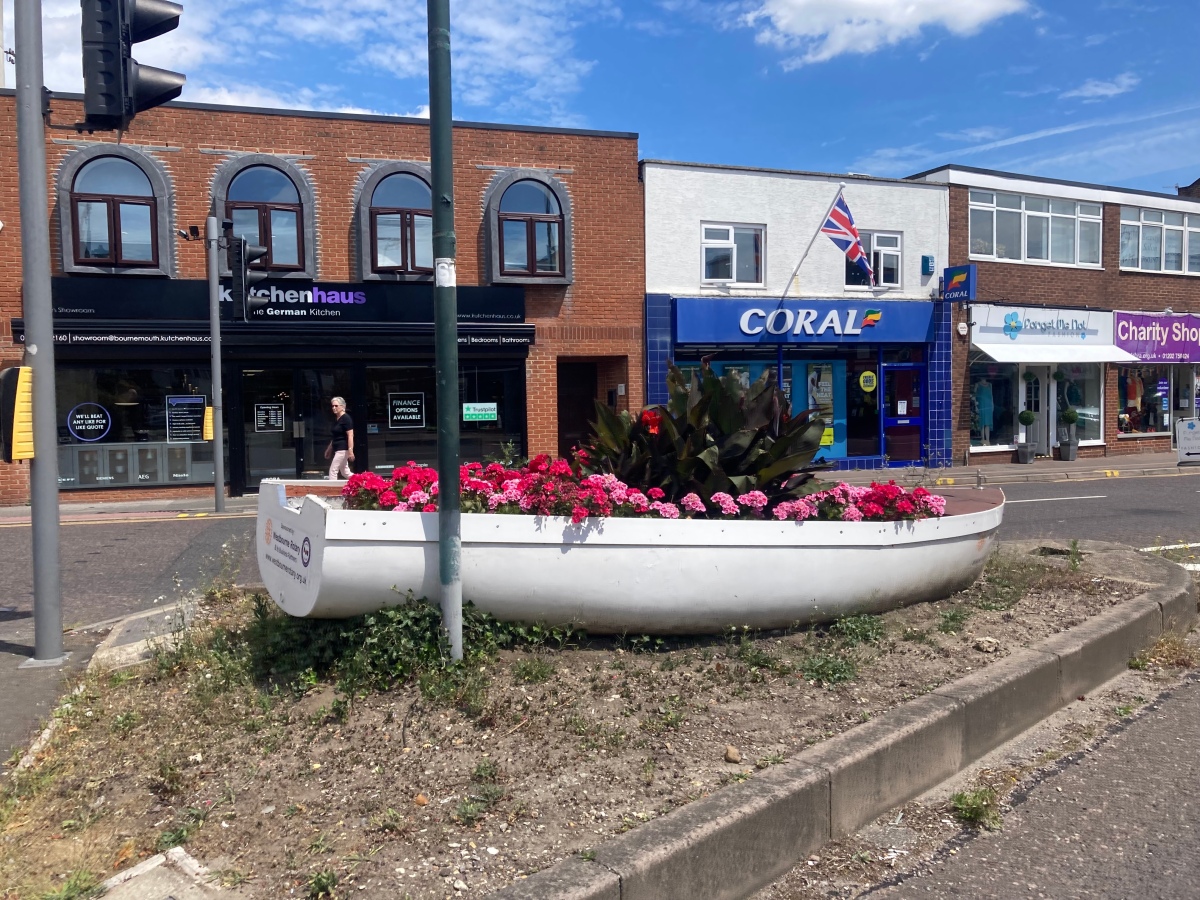 Today I have a tour guide. I mentioned I was starting to flag the other day, so a friend has offered to show me round Westbourne. So far I’ve only been to Westbourne to eat or drink. And to weigh myself – but that’s another story.

So, Westbourne is a suburb (drumroll) to the west of Bournemouth (around two miles to the west to be more precise) with a reputation for being a bit fancy. The main road is lined with cafes, restaurants and bars. And lots of floral decorations. There is plenty of free parking in side roads (limited to one or two hours depending on how close you are to the centre). Buses that pass through Westbourne include the Numbers 1, 3, M1, M2, X3 plus the tourist buses; Breezer 50, Buster’s Beach Bus and Hop-on Hop-off.

First stop is the library, which would win the award for the best library floral decorations, if that was a thing. Westbourne library actually opened in 1916, in the midst of World War . It was supposed to give people ‘a sense of purpose against the futility of war’. I think it would take more than a good book to take my mind off a global conflict.

Next, to Skerryvore; location of the former home of writer Robert Louis Stevenson. Stevenson spent three years in Bournemouth from 1884-87, whilst he was recovering from TB. It was here that he wrote his most famous work (Treasure Island, Kidnapped and Jekyll & Hyde). The house was destroyed during World War II, but the grounds remain. There’s a lighthouse shape monument to commemorate Stevenson’s residence here, but otherwise it’s rather unkempt and very un-Bournemouth-like. The town usually prides itself on its horticultural excellence.

According to the council website, there are over 50 places you can eat/drink in Westbourne. I haven’t counted and I certainly haven’t tried them all – like I mentioned, I go here to weigh myself. But here are some favourites.

Former Fish & Chip Shop of the Year winner, Chez Fred is THE place (tempted to say plaice) to buy Fish & Chips in Bournemouth. You can dine in or take away. Expect a queue.

The Duck is a trendy, if a little pretentious burger bar. You know the sort of place; sells chips in the mug, calls them fries and adds a side of truffle mayo. I’ve only eaten here once. I had the Bang Bang Cauliflower and it was very good.

The Westbourne is part of the Greene King chain, selling typical pub grub with some outdoor seating if you want to sit and watch the world go by.

There are some high street chains in Westbourne (M&S, Tesco, Iceland), but it is mainly renowned for its independent shops and boutiques.

Another focal point in Westbourne is the arcade. This looks very familiar to the arcade where I live in Boscombe, but this one is much more loved and a thriving thoroughfare of shoppers. Westbourne Arcade was built in 1884-5, designed to have a cathedral style appearance. It contains a range of shops and even the UK’s smallest (19 seat) cinema.

Linking Westbourne to the coast is Alum Chine. Claim to fame; believed to be the place where Winston Churchill jumped off a bridge and broke both his legs.

At the top of Alum Chine is Grade II Listed St Ambrose Church. Ordained in 1900, it maintains ‘an Anglican ethos in a gently Catholic atmosphere’. No idea what this means or how it differs from rough Catholicism…