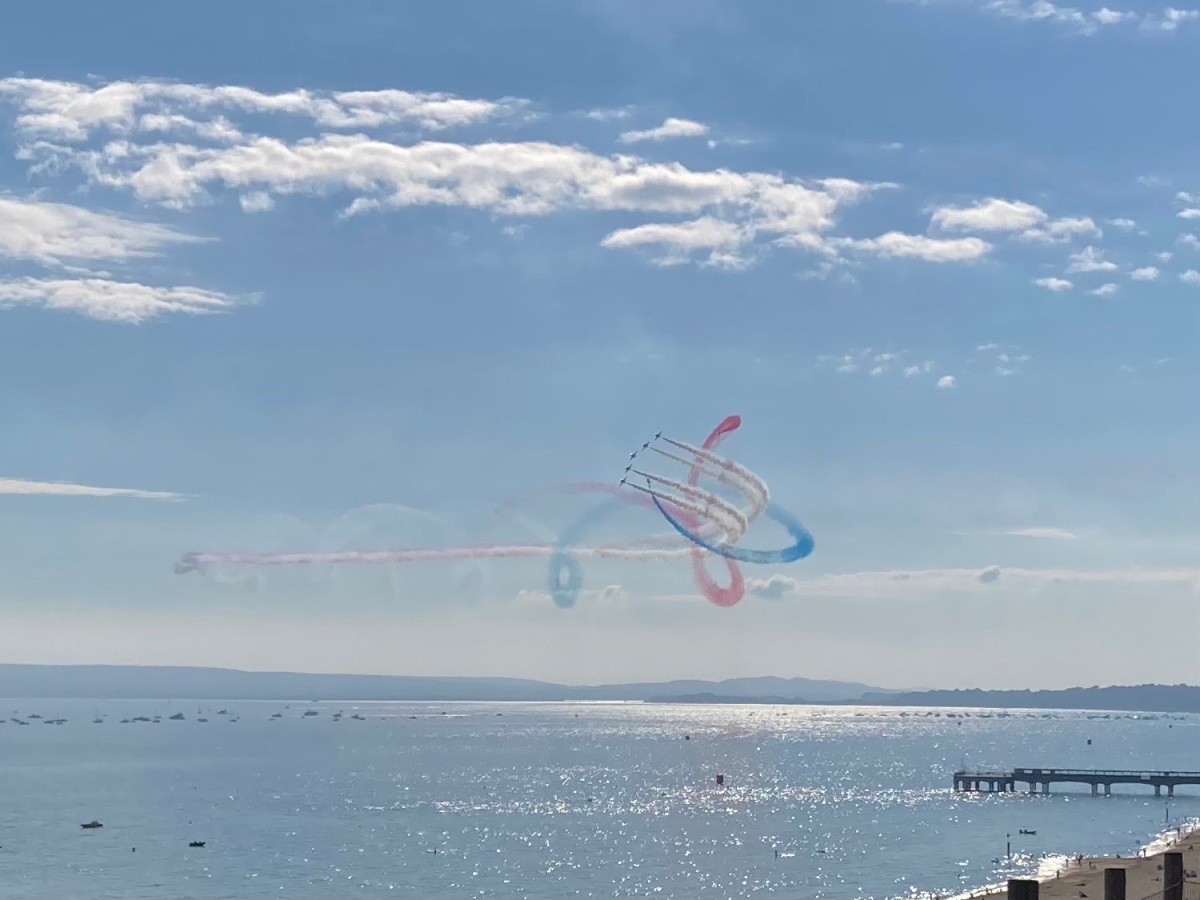 My dad and both my grandads worked at the Rolls Royce factory in Bristol building aircraft engines, so my interest in aeroplanes was instilled in me from an early age. My earliest memory is of, aged 3, being taking to the factory to witness Concorde’s first flight. So, these days, living in Bournemouth, the highlight of the calendar is the Bournemouth Air Festival.

Taking place over four days during the first weekend in September, the festival consists of a series of flying displays over Bournemouth Bay, plus additional events on land and sea. The event is free, but the bulk of the schedule is kept a closely guarded secret, which can only be accessed by purchasing a £6 programme.

Each of four days (Thursday to Sunday) sees flying displays from a range of aircraft. There’s quite a range on display from WWII planes to wing walkers, helicopters and sky divers A diverse range of flying machines perform their manoeuvres over the bay with onlookers enjoying from the beach or the cliff top.

The highlight of the show is, of course, the Red Arrows display team. Normally displaying over each of the four days of the festival, the Red Arrows are undoubtedly the main draw with many people turning up for this alone causing chaos as blocking roads for miles around with some shockingly poor parking.

This year, the Red Arrows’ first appearance was a wipeout as they only performed a couple of manoeuvres before an engine warning light sent Red 6 back to the airport. But the next day, normal service was resumed and we found a space on the cliff tops to watch them appear overhead before jetting across the bay for their performance of airborne stunts all accompanied by the signature plumes of red, white and blue smoke.

After the Red Arrows, my favourite aerobatic performance is that of the Super Pitts Muscle Bi Plane. Flown by the certifiable Rich Goodwin, who basically takes a plane up into the sky and throws it around and around. And then around a bit more. In fact quite a lot of around. I get dizzy just standing on the beach watching. A quick look at his website tells me he used to fly passenger aircraft! I wonder if I’ve been on a plane he was flying? Sedately cruising at 40,000 feet whilst trying to supress an overwhelming desire to throw down a few 360s?

This year, an addition to the programme was the Super Pitts racing a Sunseeker speedboat, billed as the Sea & Sky Sprint. It consisted of a Top Gear style challenge which no doubt was meant primarily to advertise the wares of the Poole based boat manufacturer.

When it comes to aerobatic manoeuvres, you can’t beat the pomp and precision of the Red Arrows or the crazy brilliance of Rich Goodwin in his bi plane. But my favourite part of the show is the Battle of Britain Memorial Flight. This consists of a Lancaster flanked by a Hurricane and a Spitfire. My great uncle Keith, who died earlier this year aged 101, flew in a Lancaster during the War. So, it’s a privilege to watch this enormous plane soar overhead as I say a little thank you to Keith and all his brave comrades who risked their lives night after night to protect others.

I love the dusk displays. The Fireflies; aeroplanes with LED lights which send plumes of sparks across the sky as they perform their aerobatic manoeuvres.

The dusk display is usually rounded off with Otto the Helicopter. Otto is filled with a cargo of fireworks, which are discharged as he flies in circles round the Bay.

On Friday and Saturday, there are even more fireworks with land based displays usually from either Bournemouth or Boscombe Pier.

There are usually events happening at sea. In the past these have involved visits to naval ships moored in the bay, rocket men attempting to jet from pier to pier and men dropping from Chinook helicopters. This year, there were no naval ships; the biggest ship moored off the coast were the Waverley; (built in 1946 it claims to be the last sea going paddle steamer in the world) and the Shieldhall (Britain’s largest steamship). These are some of the many boats offering tickets for cruises during the air festival to watch the action from the water.

The prom between the two piers is lined with fairground rides, food stalls etc. Meanwhile in Bournemouth there is additional entertainment in the form of music, military bands and unarmed combat displays. Meanwhile, the Overcliff are the popular Air Force, Army and Navy villages where you can get up close and personal with a Red Arrow or a tank or even a diver.